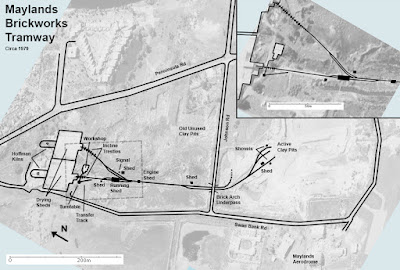 From the 1920s to the 1980s a 2 foot gauge tramway was owned and operated by the Metropolitan Brick Company Ltd. on the Maylands Peninsula, around 4 kilometres east of Perth, Western Australia. 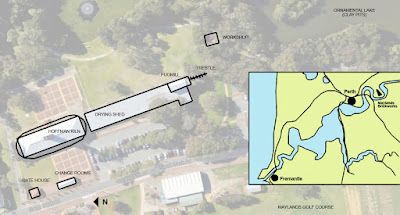 Map of the preserved Maylands Brickworks infrastructure, 2016. Inset: Location of the brickworks on the Derbarl Yerrigan (Swan River).

The Maylands Peninsula has long been associated with clay deposits. In 1885, the Peninsular Brick Company established a plant in Maylands, which was later taken over by Mills & Sons for use as a pottery works in 1905.

In 1922 the Metropolitan Brick Company Ltd. was founded, which brought the existing Helena Vale and Armadale brickworks under the one name. The same year Mr Robert O. Law, an established Perth brickmaker, acquired 60 acres of land for the Metropolitan Brick Co. between Peninsula and Swan Bank Roads. By 1927 a complete brickworks was established at Maylands, including a Hoffman Kiln, drying sheds, pug mill and brick making extruder. Between 1927 and 1936, there was a single chimney, 19 chamber 15 foot diameter Hoffman Kiln, with a 7 million per year brick producing capacity. In 1934, a second Hoffman Kiln was relocated from Helena Vale to Maylands, and was operational by 1936. By 1941 the clay pit had extended south of Johnson Road.

By 1946 the plant at Maylands was described as the most highly technical plant in Australia. The transfer system within the plant was described as a masterpiece of ingenuity. It used small railway trucks to transfer bricks from the brick making extruder to the drying sheds and then to the kiln without being handled. The Hoffman Kilns operated on powdered coal until 1967 when they were changed to an oil fired system. When the Maylands plant was in full production it employed in excess of 130 employees, most of whom lived in the vicinity of the works. It became one the main industries providing employment in the area and as such has played an important part in the history of Maylands.

The second Hoffman Kiln at Maylands was demolished after sustaining damage during the Meckering earthquake in 1968. Metropolitan Brick Holdings Ltd. as it was now known was officially acquired by H. L. Brisbane & Wunderlich Ltd. (Bristle) in October 1973. The locomotives used in the quarry were out of use by then end of 1980 and the remainder of its time saw trucks and conveyor belts employed at the brickworks. Maylands Brickworks was finally shut down just prior to Christmas 1982 and the land was sold to the City of Stirling in 1983. The original Hoffman kiln, some of the drying sheds, a portion of the incline trestle, the workshop and a few other buildings have been preserved on the site. The clay pits now form an ornamental lake in a new housing development on the peninsula. 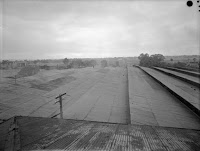 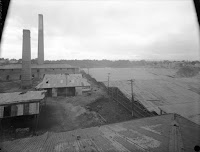 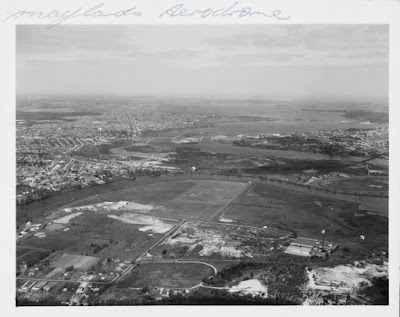 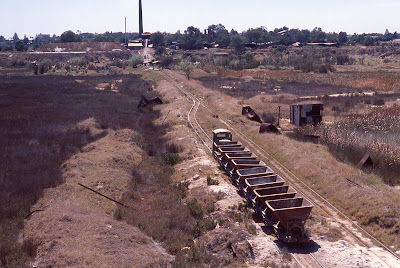 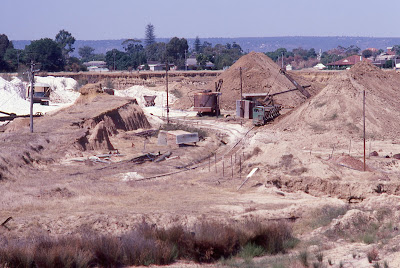 Overall view of the brickworks by Jim Bisdee looking north and south respectively from Johnson Road in 1980. Also highlights the two different types of clay being quarried. 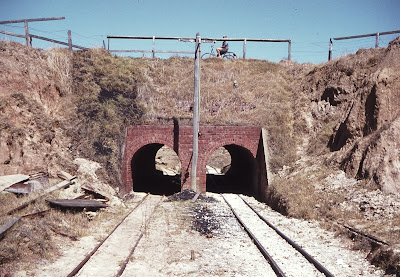 Looking south through the dual brick arch tunnels under Johnson Road photographed by Weston Langford in 1966.

A normal train on the brickworks line consisted of several side-tipping hoppers, weighing about 18 to 20 tons when loaded, with the loco always marshalled at the northern (incline) end of the train. The loco would push the empty hoppers along a flat single-line stretch before the line split into two and ran through dual brick arch tunnels underneath Johnson Road and out to the active clay pit area. As the clay was exhausted in one part of the quarry, the track was shifted or extended to a new clay face. Originally steam shovels were used, later replaced with electric powered shovels, and finally by petrol machines, all of which appear to have been manufactured by Ruston Bucyrus. Usually two areas would be worked at one time to obtain different types of clay (white and brown). Once loaded, the loco would pull its train back to the yard, where it would shunt its train to allow the loaded hoppers to be taken up the incline. The hoppers would be marshalled into twos and then pulled up the rope incline and emptied into the pugmill, before being rolled back down the incline. 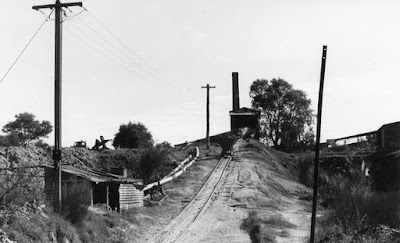 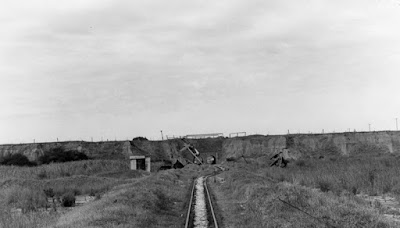 The 'yard' area of the line included two run-around loops which served two separate cable inclines, part of which were on trestles (one report says the second eastern incline and Hoffman kiln was out of use by 1973, another source says 1978). The main loop was covered by a lean-to shed, and an engine shed was located at the south end of the yard on the start of the single line section. Halfway up the main incline a transfer track was positioned at a tangent with main line and provided access to a small 5 foot turntable and to the workshop via another line passing under under the trestle. The track to the workshops had no pointwork, thus the locos and trucks were presumably taken halfway up the incline and lifted across to the transfer track. 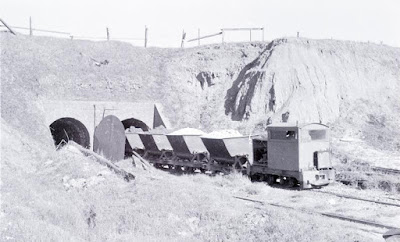 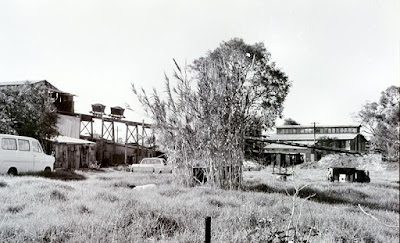 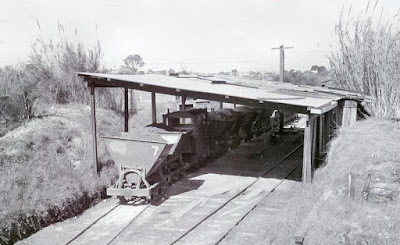 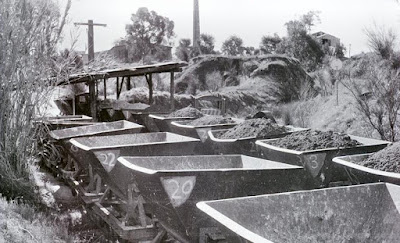 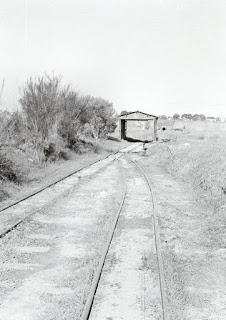 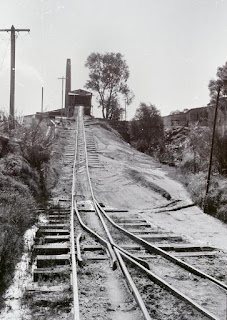 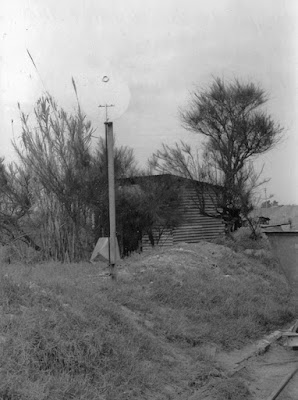 The lone signal photographed by E. Woodland in the 1960s.


McKillop, B. 2006. "From Back Yard to Bennett Brook 1976-2005: A history of the Western Australian Light Railway Preservation Association" (Review). Light Railways 187

Add comment
Load more...
Newer Post Home
Subscribe to: Post Comments (Atom)
This blog will follow my progress researching and constructing the Maylands Metropolitan Brickworks 2 foot gauge tramway in 4.5mm to the foot scale. The brickworks existed on a peninsula on a horseshoe bend in the Swan River 4kms east of Perth, Western Australia from the turn of the century until 1982.

If you have any photographs or information relating to the brickworks please don't hesitate to email me: westrailx1028@gmail.com

NB: I do not own any of these images unless otherwise noted. I post these images solely for research and education purposes.
Header Photo: Lindsay Watson, 1980